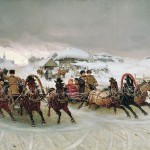 Russian Mastlenitsa– what sort of festival is it, and what are its elements?

You might have seen the Maslenitsa celebrations in the movie the Barber of Siberia, for example in this bit:

As you can see the people take this festival seriously. It would be worth noting that these celebrations last for a week, starting on Monday, gathering its swing by Thursday, reaching its peak by Saturday, when everyone is partying it large, and finishing on Sunday filled with Christian humility.

Of course there is a bit of a grotesque in the movie but only to help render, via visual effects, the festive atmosphere of the celebrations. Nevertheless the complex of events surrounding Maslentitsa is celebrated up to these days from kindergartens, private households to town hall-level events.

So, what is exactly Maslenitsa? Does it have any equivalents in other countries?

Yes of course: many countries have festive seasons that bind together pagan celebrations – approaching of the spring – with Christian events – Lent coming.

Perhaps you have heard about- and maybe took part yourself in – the Dutch Carnivals in Eindhoven and Maastricht. Modern carnival outfits and funky gadgets, as well as circus elements have a long history, and this carnival is a direct relative of Russian Maslenitsa!

So what is specific about Russian Maslenitsa? Why such long celebrations?

Imagine Russian winter in the Middle Ages – with no supermarkets, microwaves or TV dinners.

It has been – 30*C, (-22 F)  for a good several months in the land covered with snow. Your main ratio is what you, as a peasant, have managed to stock up during the summer time. 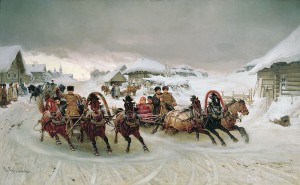 It gets dark at around 16:00. No electricity – only candles – and around 7 hungry kids to feed…

And suddenly this whole winter world is starting to come to an end. There is still a long way to the very end – to the spring that brings around dramatic change to the weather, daily routine and your diet. There is a good 1 month to get there.

What emotions fill you? Naturally limitless exult, excitement and happiness!

These emotions were shared by all peoples that know a thing or two about seasons, that’s why these pagan celebrations of welcoming spring are familiar to many people across the world.

The main themes of Russian Maslenitsa would be: welcoming of the spring, fertility (harvest  and childbirth), veneration of the dead, preparing for the fasting (Lent).

The elements and traditions supporting these themes were: 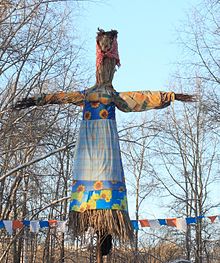 Lady Maslenitsa Dummy – a straw dummy representing fertility. This fertility concept needs to be killed and resurrected for the burst of new life. It would be burned on Saturday by the cheerful crowd and its ashes will be scattered around the fields thus blessing them for the harvests to come.

Maslenitsa is also the time when the young and unmarried people will be at the centre of events – a lot of fun activities such as sledging, playing snowballs, and bachelors being mocked up (in a friendly way). This also was to help matchmaking so after the fasting the community will see new marriages and then children.

Another central element of Maslentisa are pancakes.

These are baked and enjoyed from Monday all week long, with sweet or sour dips or stuffing. Or without stuffing too! A bit of butter spread over a piping hot pancake – and melting straight away – is a great way to go! Actually, the very name-Maslenitsa- comes from the word maslo (butter, Rus. Масло)

And what is so special about pancakes? They do remind the shape of the sun, and in the modern interpretation this similarity is empathized. (Spring-sun-fun-pancake association is quite strong).

Moreover, stuffing your belly has a meaning to it as well. In the old days Maslentsa was also coincided with approaching of New Year, and the belief was quite strong that the way you celebrate it the way this year will treat you. Nobody wanted to be hungry, but having a lot of food on the table was a dream of every Middle Ages man. Plus this is sort of eating in advance – before the fasting time and its strict diet.

Traditionally though, pancakes were the food eaten at the wake ceremonies – a way of venerating the memory of the person who has gone away. This tradition is still very strong. During Maslenitsa, within the framework of celebrations of the gone and the coming, of the death and the birth, pancakes also represent the veneration and respect to the gone generations.

Another happy and festive tradition, associated with the veneration of the dead, is fighting, or Russian boxing. This tradition has deep Slavic routes – when a person passed away a whole set of rituals and ceremonies surrounded the farewell with this person. Some of those rituals were a farewell feast and competitive fighting. 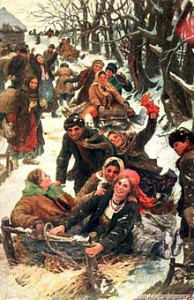 This was huge fun for the males back in the day, and the fist fighting took form of a Stenka na Stenky – Wall on the Wall, where a street was fighting against a street, a district versus district and so on. First it was teens versus teens, then younger men and then adults. There were some rules to prevent the fight from going too violent – if the person has fallen he was not to be hit. The famous and popular in Russia proverb “Do not hit a man when he’s down” (Rus. Не бей лежачего) has roots in that sport.
Another competitive game, and this is still very popular, – is taking the snow town by assault (Ru. Взятие снежного городка). A huge wall is made of stone and frozen water, and there are two teams – the siege and the assaulting party.  The town had to be ruined, that was the point of the game, and the siege would fight up to the end throwing shovelfuls of snow onto the assault and otherwise making the breaking up of the wall more challenging.

The Church has always been trying, well not to forbid these pagan routed celebrations- for the events of such scale it would have been quite an unpopular strategy. But the Church has brought some corrections and new dimensions to these celebrations.

In Christianity there are many fasting periods which have spiritual meaning and cleansing via asceticism. The Great Lent is the longest fasting time (it lasts for about 40 days), and in Orthodox Christianity, the most strict and abstemious. During Lent, meat, fish, dairy products and eggs are forbidden. Furthermore, Lent also excludes parties, secular music, dancing and other distractions from the spiritual life.

During the week of Maslenitsa, meat is already forbidden to Orthodox Christians, and it is the last week during which milk, cheese and other dairy products are permitted. Thus, Maslenitsa represents the last chance to partake of dairy products and those social activities that are not appropriate during the more prayerful, sober and introspective Lenten season.

Eat up and enjoy the delicacies: the Lent is coming; dance and have fun till dawn: in a week you will turn to prayers and modest lifestyle – is a dimension that Maslenitsa has up to modern days.

Natually the Church recommended to be more moderate in gluttony and festivity – it is not worthy of a devout Christian to gorge and know no measure to partying. But can you handle this childlike excitement and fun?

But the most beautiful and touching moment is the ending of Maslenitsa. No, Maslenitsa doesn’t end with the Maslenitsa Dummy getting burnt at the jeers of the lively crowd and dances with bears.

Dazzling Maslenitsa week ends with a quiet and modest Sunday of Forgiveness. This day everybody make a bow before one another and says “Forgive me”. And everybody grants forgiveness, remembering that the main forgiveness of sins will be at God’s disposal.

And from this day filled with the spirit of brotherly Christian love, the new focus arises – the focus on a spiritual way of Great Lent towards Easter.