Read about popular snack products in Russia – chechil, capelin roe, cheese Druzhba. These foods can be used  for a quick snack with a tea on or be a party bite.

For a snack time these products often go well with a cup of tea.

As a Russian party food, chechil cheese is a good with beer,  and you can make miniature buttered breads with capelin caviar or use spread cheese for canape – with bologna sausage and a bit of tomato or olive.

Chechil is traditional Armenian cheese of strong salty and smoky taste. It has a special form – dense stings plated into a braid.

Chechil cheese is very popular in Russia as a beer snack. One cut through the braid gives you a generous amount of tiny pieces of chechil which makes it an easy finger food.

Chechil has a low fat content and is considered as diet food (if you give the beers a miss of course 🙂 ). 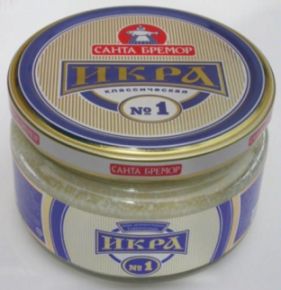 Capelin is a small sea fish that live in the cold northern oceans. Capelin roe is considered as a high value product and prepared by steeping in brine and then packing in small glass jars. This roe is very popular in Japan and is often a part of various sushi stuffing.

In Russia capelin roe is often consumed as a spread over buttered French bread. As finger food, you may cut miniature cubes or other figurrettes from bread, butter and spread the caviar. It is an delicate taste and texture.

The manufacturer of the cheese has put up a funky monument to the syrok in front of its headquarter in Moscow. Two characters of a world- famous fable (translated in Russian in 19 century by Krylov and now a studied at elementary schools) – a fox and a crow, hold a piece of Druzhba cheese with love and care.