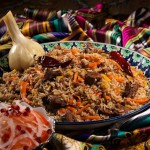 Written by myRussianFoods.com on October 19, 2014. Posted in Main courses 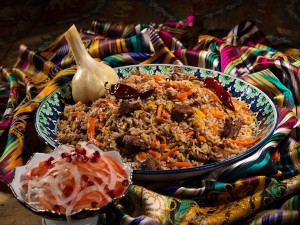 Pilav (Rus. Plov) is a staple Uzbekistan meal, hearty rice with chunks of meat, special spices and vegetables. There are a lot of variations of pilav rice, including recipes where rice is cooked with dried fruit, all covered with a thin sheet of pastry.

Traditionally plov is cooked in the open air, in the large metallic pot called “kazan” (which is similar to a cauldron). And an important traditional ingredient is sheep tail fat, in which the meat is fried (in Russian this fat is called “kurdyuchnyi zhir”, and it might be possible to buy it from the butchers selling lamb in the market).

Spices are very important for the flavour of pilav: cumin seeds (зира), coriander seeds (зерна кориандра), berberis. Dried basil can be used as well, and saffron to enrich the colour. If you can’t find some of the spices, in Russian shops they usually sell spice mixtures for plov that has all of them.

For extra flavour a whole garlic bulb is used (upper peel removed), which get simmered together with rice and then discarded.

What is good about pilav rice that this meal can last you for 2 days, if you choose to cook enough.

Cumin seeds, coriander seeds, berberis – half a teaspoon each

Bring carrots, salt, spices and place garlic into the middle of the frying pan. Cover the ingredients with some boiled water. Cover the pan with a lid or a plate and let simmer for about 20 minutes (this bouillon is called zirvak).