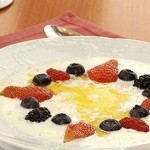 Written by myRussianFoods.com on February 23, 2014. Posted in Breakfast 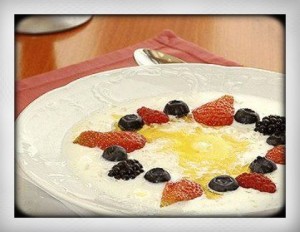 Semolina porridge is a very popular with children and often served at kindergartens in Russia.

It has custard-like texture and can be sweetened by berries or jam for the delight of the little ones.

It is cooked very quick, but there is a little trick – once the porridge starts boiling, you will need to constantly stir it to prevent burning or lumpiness. Good news that it will only take up to 3 minutes.

So if you can buy semolina groats from Russian shops or in your grocery store (dry good section) try out this quick recipe.