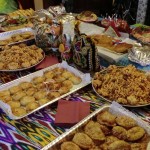 Written by myRussianFoods.com on March 24, 2015. Posted in News

22 March 2015, Amsterdam – Rossotrudnichestvo organization jointly with Jelena Koezjmina, Member of the Dutch Council for Russian compatriots and Ilona Cherepanova, founder of the ‘Russian Culinair’ community, hosted Lente festival dedicated to welcoming spring. The event was primarily organized for former USSR citizens residing in the Netherlands and took place in the building of the Russian Trade Representation.

Spring equinox celebrated by many nations was the theme of the event. The Slavs used to welcome the spring and baked traditional pastry in the shape of lark birds. Turkic nations celebrate Nowruz – the festival with a thousand years long history, stemming back to zoroastrianism. Even in Holland the “official” arrival of the spring is celebrated on the 21-22 March.

The festival was opened by the officials. On behalf of the Federal Agency Rossotrudnichestvo Zurab Agirbov welcomed the guests and said how happy he was to see such events happening on a regular basis. He has invited the guests to the planned events in May to commemorate the Soviet soldiers who have fallen in the Netherlands during the Second World War. More details on the upcoming events can be found on the official Facebook page of Rossotrudnichestvo (https://www.facebook.com/rossotr.netherlands).

The speech was followed by Alexandr Cherevko, Head of the Trade Representation of Russia in the Netherlands. Mr Cherevko also greeted the guests who have gathered to foster traditions and friendship. Alexandr Chervko noted that the Netherlands remain a major economic partner of Russia. To promote business relations between the two countries the Trade Representation, being a part of the Russian Embassy, hosts regular events. The goal of such events is to provide consulting assistance to the entrepreneurs who look for entering the new markets and search for business partners.

The concert was followed by a lecture of Ilona Cherepanova, Russian Culinair, and the representative of the catering the Silk Road Kitchen. Ilona told the audience about traditions of the pagan Slavs and Central Asian cultures when celebrating the spring equinox. The chef of Silk Road Kitchen, catering specializing in Uzbek delicacies, said that in the East hospitality starts with the rich welcoming table.

Then the audience voted for the best pastry – traditional lark cakes and a pie with poppyseed stuffing, which was made by the little guests.

To crown the Festival the guests were welcomed to the table filled with exquisite dishes typical of Russia and Central Asia. Salads such as Olivier, Dressed Herring, pilaf rice and various sweet and savoury pastry were the highlights loved by everyone.

The guests enjoyed the delicious meals and each other’s company with the karaoke background.

MyRussianFood.com was one of the sponsors of the event.

Organizers of the event:

You can order Uzbek meals, sweets and pastry from the company Silk Road Kitchen.

Joing MyRussianFood.com on Facebook and check out our recipes!